Why Do Most Societies Have Religion

Tentatively, scientists are asking: exactly what is religion, and what is it for? 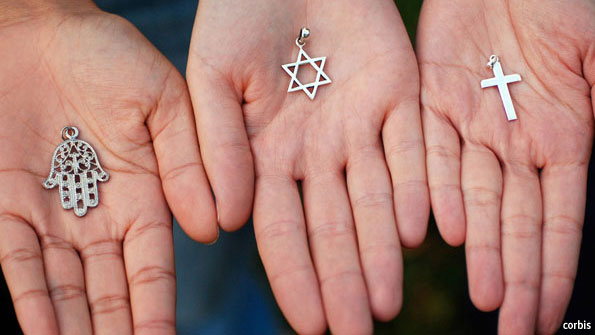 RELIGION is ubiquitous but it is not universal. That is a conundrum for people trying to explain it. Religious types, noting the ubiquity (though not everyone is religious, all human societies have religions), argue that this proves religion is a real reflection of the underlying nature of things. Sceptics wonder why, if that is the case, it comes in such a variety of flavours, from the Holy Catholic and Apostolic Church to the cargo cults of Papua New Guinea—each of which seems to find the explanations offered by the others anathema.

To bring a little scientific order to the matter, researchers taking part in a multinational project called Explaining Religion have spent three years gathering data on various aspects of religious practice and on the sorts of moral behaviour that religions often claim to govern. The data-collection phase was wrapped up at the end of 2010, and the results are starting to be published.

At the moment, most students of the field would agree that they are still in the “stamp collecting” phase that begins many a new science—in which facts are accumulated without it being clear where any of them fit in. But some intriguing patterns are already beginning to emerge. In particular, the project’s researchers have studied the ideas of just deserts, of divine disapproval and of the nature of religious ritual.
One theory of the origin of religion is that it underpins the extraordinary capacity for collaboration that led to the rise of Homo sapiens. A feature of many religions is the idea that evil is divinely punished and virtue is rewarded. Cheats or the greedy, in other words, get their just deserts. The selflessness which that belief encourages might help explain religion’s evolution. But is the idea of universal just deserts truly instinctive, as this interpretation suggests it should be?
Mysterious ways

To test that Nicolas Baumard (then at Oxford, now at the University of Pennsylvania) used a computer to check people’s reactions to a modern morality tale. Dr Baumard’s volunteers read about a beggar asking for alms, and a passer-by who did not give them. In some cases the pedestrian was not only stingy, but hurled abuse at the poor man. In others, he was skint and apologetic. Either way, he went on to experience some nasty event (anything from tripping over a shoelace, via being tripped up deliberately by the beggar, to being run over by a car).

The question asked of each volunteer was whether the second event was caused by the passer-by’s behaviour towards the beggar. Most answered “no”, the assumption being it was the shoelace, or the beggar’s foot, or the car. But Dr Baumard also measured how long each volunteer thought about the answer—and he found that when the passer-by had behaved badly to the beggar and then suffered an unrelated bad incident, volunteers spent significantly longer thinking about their answers than when the passer-by had behaved well, or the beggar had tripped him up deliberately.

Dr Baumard’s interpretation, though he cannot prove it, is that the volunteers were indeed making a mental connection, during this extra thinking time, between the passer-by’s actions and his subsequent fate. In other words, they were considering the idea that he was getting his just deserts, dished out by some sort of universal fate.

That interpretation will require a lot of further testing. But it tallies with a second result from the project, which looked at the idea that God is always watching you.
To investigate this, Dr Baumard teamed up with Ryan McKay of the University of London and Pierrick Bourrat of the University of Sydney. Together, they checked whether subtle cues about being observed had an effect on people’s behaviour.

The eyes have it

In this case they invited their volunteers to rate the acceptability of two acts—keeping the money from a lost wallet and faking a résumé. Half the volunteers were given the task written on a piece of paper which also included a picture of a pair of eyes. The other half saw an image of flowers with their instructions. The upshot was that those who saw the eyes rated both misdemeanours as more serious than those who saw the flowers.

Again, that proves nothing. Prying eyes need not indicate a supernatural watcher, and people are well-known to have their consciences pricked when they are under non-divine scrutiny as well. But it does indicate a mental process that religious ideas of a judgmental, omniscient god would be able to tap into.

To explore that idea further, Dr Bourrat joined forces with Quentin Atkinson of the University of Auckland. Together, they pored over the World Values Survey, a poll of 87 countries that asks respondents, among other things, about their religious beliefs and the acceptability of a range of infractions, from littering to adultery. The upshot of Dr Bourrat’s and Dr Atkinson’s analysis was that people whose religion includes an omniscient, judgmental god (Christians, Muslims and so on) regard the whole range of such transgressions more harshly than those, such as Buddhists, whose religion does not. (Agnostics and atheists think like Buddhists.)

The ideas of just deserts and of the nagging of conscience are both, in essence, private to each brain. But a third religious idea that might foster co-operation is very public indeed. That is the idea of shared rituals.

Harvey Whitehouse, also of Oxford, thinks these different ways of remembering are harnessed by what he sees as two distinct aspects of religiosity. The doctrinal religious mode, as he dubs the first of these aspects, favours frequent but not particularly exciting rites that allow large bodies of teaching to be stored in a person’s semantic memory. That explains Friday prayers in Islam, or daily mass for the more enthusiastic sort of Catholic.
The second aspect—the imagistic mode, in Dr Whitehouse’s terminology—relies on rare but highly arousing events that are etched into the episodic memory by dint of their emotional salience. In principle, these could be either cheerful or unpleasant. However, since depths of trauma are recalled more vividly than heights of euphoria, religions should, in his view, prefer the former. Which, indeed, they do.

In one particularly grisly rite of passage, for example, young men belonging to Australia’s Aranda tribe are first circumcised and then pinned face down as several of their elders bite the initiate’s scalp and chin as hard as they can, before slitting his urethra with a stone blade. That is the sort of thing you are not going to forget in a hurry. You are also going to feel a strong affinity with those others who have gone through it, and perhaps a certain disdain for those who have not—a solidarity-building exercise, then, if ever there was one.

To test his prediction about there being two basic types of ritual, Dr Whitehouse recruited the assistance of Dr Atkinson. Together, they compiled a database of 645 rituals from 74 cultures, drawing on the Human Relations Area Files, a large collection of ethnographic material. They rated each ritual’s frequency and the level of arousal involved. As predicted, though low-arousal rituals are more common than high-arousal ones, there is a tendency (see chart) for ritual behaviours to cluster at either end of the arousal spectrum.

The next step is to enlarge the trove of data further—in particular by adding historical information to the contemporary sort already in it. The researchers may also extend their net to non-religious rituals, from hazing by army special-forces groups, to the intoning of corporate hymns. This is the aim of a follow-up to Explaining Religion, which is due to begin in earnest later this year. It will bring together anthropologists, archaeologists, evolutionary psychologists and historians, and will trawl though 5,000 years of history, recording rituals as it goes.

So, even though Explaining Religion did not actually achieve its rather ambitious eponymous goal, it has found some promising avenues of investigation, and led to that great desideratum of science, more research. Most importantly, though, it has opened to disinterested investigation an area of human behaviour that all too rarely sees it. That alone is worth celebrating. Happy Easter (or other Spring fertility festival of your choice).

Posted by Garrett Fogerlie at 1:05 AM