Jesus’ Resurrection, According to the New Testament

Keep in mind that the New Testament is a highly questionable source, and should be looked at with scepticism! The majority of its books, if not all, were not written by their namesake but by descendants many, many years later. (One reason for this is that most people though that the apocalypse was going to come in their lifetime, as Jesus said, so why bother to write it down)

Nevertheless, let’s assume for a moment that it is true. The books say Jesus died for our sins, and three days later came back to life. This is thought by many to be the pinnacle argument for why to believe that he is the son of god. According to the New Testament, resurrection is almost commonplace. Both Lazarus and the daughter of Jairus were resurrected. Albeit it was supposedly Jesus that resurrected them, who’s to say someone didn’t resurrect Jesus after his death. Resuection was such a commonplace at that time, that apparently nobody seems to have thought it worthwhile to follow up with either Lazarus or Jairus’ daughter after they came back from death. You would think that they would have been hounded with questions and that these questions would defiantly have been worthwhile to include in the bible. It must have been so common that nobody cared about their extraordinary experiences. Nor does anyone seem to have kept a record of whether or not, or how, these two individuals re-died. Or if they stayed immortal? Perhaps they are still wandering around to this very day? Who knows perhaps that’s where the vampire myth comes from? They may be in complete misery, condemned to eternal life on earth. How can they get into heaven? This misery being inflicted upon a mere bystander in order to fulfil the otherwise unfulfilled prophecy that Jesus would come again in the lifetime of at least one person who had seen him the first time around.

For the Son of man shall come in the glory of his Father with his angels; and then he shall reward every man according to his works.
Verily I say unto you, There be some standing here, which shall not taste of death, till they see the Son of man coming in his kingdom.
Matthew 16:27-28


"the graves were opened; and many bodies of the saints which slept arose, and came out of the graves after his resurrection, and went into the holy city, and appeared unto many."

This seems incoherent, since the dead corpses apparently rose both at the time of the death on the cross and of the Resurrection. Oddly enough history has no record of corpses rising form graves. It must have scared the hell out of everyone around the world, but yet no one seems to written it down. Not even the many historians whose records, while meticulous, apparently deemed that corpses’ crawling up everywhere was not as important or interesting as the suns rise and set time, or the yield of a particular crop and such.

The bible records the taunts and comments of the Roman soldiers, at the time of Jesus’ death, and not a single one said, “Holly shit, corpses are coming out of the fucking ground! Run!!!” 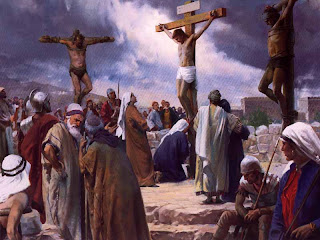 Resurrection is apparently so frequent, that no one pays any attention to the dead rising from their graves. This undermines the uniqueness of the resurrection by which all of mankind’s sins were forgiven.

There is no cult or religion before or since, from Osiris to vampirism to voodoo, that does not rely on some innate belief in the "undead." To this day, Christians disagree as to whether the day of judgement will give you back the old shitty, abused, wreck of a body that has already died on you, or will you be given some new form. If it’s the latter, people will have to come up with a new way in which they can recognise one another.

For now though, we can say that resurrection would not prove the truth of Jesus’ doctrine, nor his paternity, nor the probability of still another return in fleshly or recognisable form. The action of a man who volunteers to die for his fellow creatures is universally regarded as noble. The extra claim not to have "really" died, because he was back in three days, makes the whole sacrifice tricky and meretricious.
Thus, those who say "Christ died for my sins," when he did not really "die" at all, are making a statement that is false in its own terms. Having no reliable or consistent witnesses, in anything like the time period needed to certify such an extraordinary claim, we are finally entitled to say that we have a right, if not an obligation, to respect ourselves enough to disbelieve the whole thing, unless or until superior evidence is presented, which it has not been. Exceptional claims demand exceptional evidence!