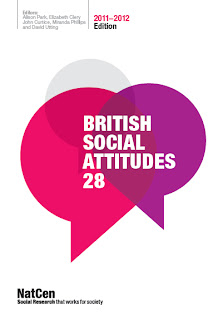 An interesting survey by NatCen shows that religion is indeed in decline in Britain. Download the PDF on religion here.

"The first point to note is that there is no evidence of a lifecycle effect – that is, as people grow older they become more or less religious. Non-affiliation remains relatively stable as each generation ages; for example, 30 per cent of those born between 1936–1945 did not follow a religion in 1983 (when they were aged 38–47 years), compared with 31 per cent in 2010 (when they were 65–74 years).

Conclusions
Britain is becoming less religious, with the numbers who affiliate with a religion or attend religious services experiencing a long-term decline. And this trend seems set to continue; not only as older, more religious generations are replaced by younger, less religious ones, but also as the younger generations increasingly opt not to bring up their children in a religion – a factor shown to strongly link with religious affiliation and attendance later in life.
What does this decline mean for society and social policy more generally? On the one hand, we can expect to see a continued increase in liberal attitudes towards a range of issues such as abortion, homosexuality, same-sex marriage, and euthanasia, as the influence of considerations grounded in religion declines. Moreover, we may see an increased reluctance, particularly among the younger age groups, for matters of faith to enter the social and public spheres at all. The recently expressed sentiment of the current coalition government to “do” and “get” God (Warsi, 2011) therefore may not sit well with, and could alienate, certain sections of the population. "

Now for the charts: 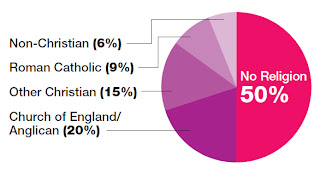 50 per cent has no religion in Britain 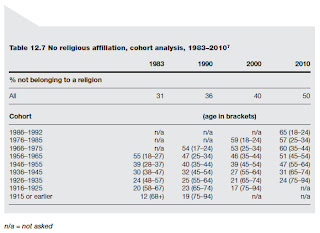 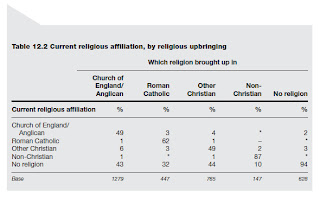