Do kids have to be taught about the supernatural? - Thomas Rees - [epiphenom] the science of religion and non-belief

Here's a new study by Ashley King, a grad student at the University of Arizona. She ran a group of 124 children aged 4-8 through a carefully designed study designed to see whether they understood what supernatural omniscience is. 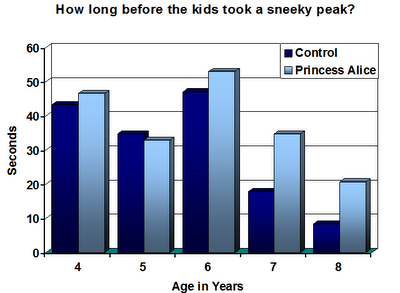 The basic set-up has been used in previous studies. Half the kids were shown a video of someone calling herself "Princess Alice" who said she had special invisible powers and would be present through the whole ensuing test. The other half were just shown a video of the same person wearing jeans and t-shirt who simply welcomed them and said she was a friend.

After a few other tests, they were given a puzzle by the experimenter. Basically, this involved some numbers hidden on the bottom of wooden blocks that were shown to the child and shuffled behind a screen. The child then had to guess where the different numbers were - an impossible task of course.
Read more

Posted by Garrett Fogerlie at 9:38 PM