Is the "United Nations" a code word for the Illuminati? 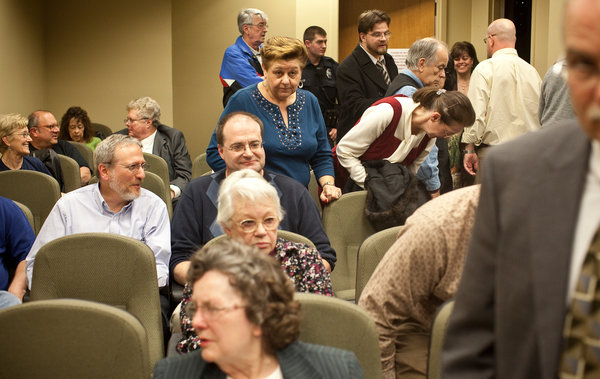 Jared Soares for The New York Times
At a Roanoke County, Va., meeting, dozens opposed the county's paying $1,200 to a nonprofit.

Across the country, activists with ties to the Tea Party are railing against all sorts of local and state efforts to control sprawl and conserve energy. They brand government action for things like expanding public transportation routes and preserving open space as part of a United Nations-led conspiracy to deny property rights and herd citizens toward cities.

They are showing up at planning meetings to denounce bike lanes on public streets and smart meters on home appliances — efforts they equate to a big-government blueprint against individual rights.

“Down the road, this data will be used against you,” warned one speaker at a recent Roanoke County, Va., Board of Supervisors meeting who turned out with dozens of people opposed to the county’s paying $1,200 in dues to a nonprofit that consults on sustainability issues.

Local officials say they would dismiss such notions except that the growing and often heated protests are having an effect.
Read more

Posted by Garrett Fogerlie at 5:19 PM