"A new analysis of more than 550,000 Gallup-Healthways Well-Being Index interviews conducted over the last year and a half finds that Americans who are the most religious also have the highest levels of wellbeing. The statistically significant relationship between religiousness and wellbeing holds up after controlling for numerous demographic variables. Higher levels of healthy behaviors, life evaluation, work environment perceptions, and emotional health affect religious Americans' high wellbeing.

As you can see below, this may very well be true: 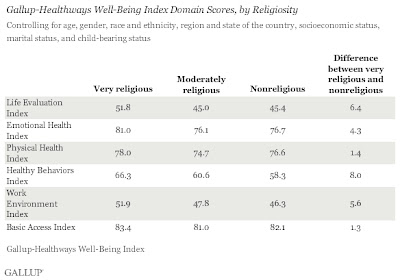 Note that non-religious generally fare better than the moderately religious.

But here's from an earlier Gallup survey that I blogged about which shows which countries are most religious: 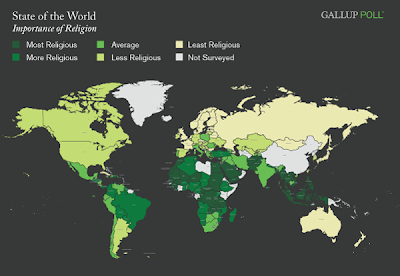 I am thinking that while religion may have positive effects on health, because there's less partying etc., the effects on society at large are not good. Of course, one can't attribute all problems in the south to religion, but it's a matter of fact that religion has lots of negative side effects ranging from terrorism to witch hunting.

"People who see themselves as active participants in their faith are less susceptible to depression. But for those who feel alienated from their religion, it makes them more likely to be clinically depressed.
Jack Jensen, director of UVU’s mental health services, and Cameron John, associate professor of behavioral sciences, decided to survey UVU students after Mental Health America ranked Utah in 2007 as the most depressed state in the nation."

If religion helps against depression, then surely Utah should have been better off. But if you read the article it seems that the religious in-group, dedicated mormons, has better mental health at the expense of others.

So I'll stick to Atheism for now.
Posted by Garrett Fogerlie at 11:56 PM