Sean Faircloth, with the Richard Dawkins Foundation for Reason and Science, discusses his new book, Attack of the Theocrats, which examines the crumbling of the wall of separation between church and state—and offers a specific and sensible plan for rebuilding it. 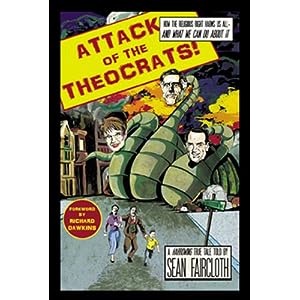 or Barnes and Noble Nook
At no time in American history has the United States had such a high percentage of theocratic members of Congress-those who expressly endorse religious bias in law. Just as ominously, at no other time have religious fundamentalists effectively had veto power over one of the country's two major political parties. As Sean Faircloth argues, this has led to the crumbling of the country's most cherished founding principle-the wall separating church and state-and presages yet even more crumbling. Faircloth, a former politician and current executive director of the Secular Coalition for America, moves beyond the symbolism to explore the many ways federal and state legal codes privilege religion in law. He goes on to demonstrate how religious bias in law harms all Americans-financially, militarily, physically, socially, and educationally. Sounding a much-needed alarm for all who care about the future direction of the country, Faircloth offers an inspiring vision for returning America to its secular roots.

This post was made using the Auto Blogging Software from WebMagnates.org This line will not appear when posts are made after activating the software to full version.
Posted by Garrett Fogerlie at 11:17 AM