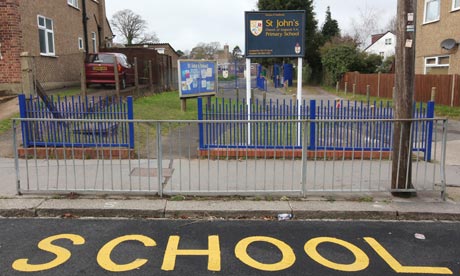 St John's Church of England primary school in Croydon, south London, has 7% of pupils eligible for free meals. The proportion in the borough is 24%. Photograph: Frank Baron for the Guardian

England's faith state schools are failing to mirror their local communities by shunning the poorest pupils in their area, analysis by the Guardian of the latest government figures shows.

The Roman Catholic church, which has repeatedly insisted its schools are inclusive, comes out particularly badly in the examination of data published by the Department for Education (DfE) last month and in December. Three-quarters of Catholic primary and secondary schools have a more affluent mix of pupils than their local area.

The figures also reveal that most Church of England (CofE) primary schools have an intake that is untypically affluent and more middle-class than a year ago. The findings will fuel claims that faith schools have been picking pupils from well-off families by selecting on the basis of religion.

The Guardian analysed the proportion of pupils eligible for free school meals – a key indicator of poverty – in each of England's 19,534 state, non-selective primary and secondary schools. All schools designated for children with special needs were taken out.

The schools have been grouped according to whether they are affiliated to the CofE, the Catholic church or have no religious character. The number of state-funded Muslim and Jewish schools is too small to form a meaningful group – however, the 11 state-funded Muslim schools in England are collectively more reflective of their community, with 67% of primaries and 60% of secondaries having more than the local authority average of free school meal pupils. The 36 Jewish state schools on average have less representation of pupils on free school meals than their local area. There are many Christian schools connected to other denominations, but the data does not specify which denomination.

It is well-known that the average proportion of deprived pupils in faith schools is lower than it is for all schools in England. However, it has not until now been clear whether this is a facet of the areas they serve. Our analysis shows for the first time the extent to which faith and non-faith schools reflect – or fail to reflect – the proportion of poor pupils in their area.

The vast majority of Catholic primary and secondary schools fail to mirror the proportion of poor pupils living in their community, the data reveals. The Catholic church has fought successful battles to retain control of admissions to its schools.

Some 73% of Catholic primaries and 72% of Catholic secondaries have a lower proportion of pupils eligible for free school meals than the average for the local authority.

It is the same for CofE primary and secondary schools. Some 74% of these primaries and 65.5% of secondaries have a smaller proportion of pupils eligible for free school meals than is average for the local authority.

Anna Vignoles, a professor of the economics of education at the Institute of Education, University of London, said the Guardian's findings could be explained by the fact that faith schools draw their pupils from their faith communities, which are not necessarily located in the same postcode or area as their school.

A study by Dr Rebecca Allen and Professor Anne West of the Institute of Education and the London School of Economics, published in 2011, showed that middle class parents are more likely to apply to faith schools – and that the admissions procedures there are easier for them to navigate.

Our data also shows that CofE primary schools are increasingly serving the better-heeled in their communities.

Whereas this year 74% of the church's primaries have a smaller proportion of the poorest pupils than their local authority, the year before 72% did.

At a more local level, the same is the case. This year, 63.5% of the church's primaries have a smaller proportion of the poorest pupils than their postcode, compared to 60% last year.

This post was made using the Auto Blogging Software from WebMagnates.org This line will not appear when posts are made after activating the software to full version.
Posted by Garrett Fogerlie at 10:22 AM