One Jesus for liberals, another for conservatives - Johnjoe McFadden - Guardian Comment Is Free

The abstract of the original study can be found here. 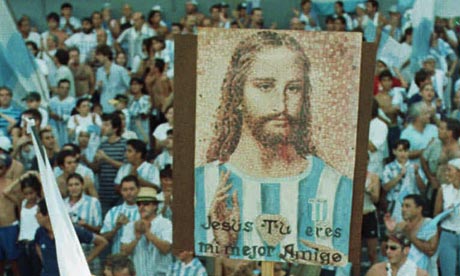 Creating God in our own image: a poster shows Jesus in an Argentinian football shirt. Photograph: Arnaldo Pampillon/AP

Love thy neighbour, so long as he is not an illegal immigrant. Blessed are the poor, so long as they are deserving. And, though it may be harder for a rich man to enter the kingdom of heaven than to pass through the eye of a needle, multimillionaires should have no problem passing through the door of the Oval Office.

Religion and politics have always made uneasy bedfellows; yet how can Christians from all shades of the political spectrum reconcile their diverse views with the teachings of a single man?

A study led by Lee Ross of Stanford University in California has found that the Jesus of liberal Christians is very different from the one envisaged by conservatives. The researchers asked respondents to imagine what Jesus would have thought about contemporary issues such as taxation, immigration, same-sex marriage and abortion. Perhaps not surprisingly, Christian Republicans imagined a Jesus who tended to be against wealth redistribution, illegal immigrants, abortion and same-sex marriage; whereas the Jesus of Democrat-voting Christians would have had far more liberal opinions. The Bible may claim that God created man in his own image, but the study suggests man creates God in his own image.

Yet both groups recognised that their own views were not always identical to those of Jesus. The researchers divided issues into those concerned with fellowship (wealth distribution, immigration), and those concerned with morality (gay rights, abortion). Conservatives envisaged a Jesus with views close to their own on morality issues; but they recognised that the man who gave all his possessions to the poor would probably have advocated more progressive taxation policies than those of the Republican party. Conversely, liberals saw Jesus as having similar views as themselves on fellowship issues but they believed his views on gay rights would be to the right of their own.

This post was made using the Auto Blogging Software from WebMagnates.org This line will not appear when posts are made after activating the software to full version.
Posted by Garrett Fogerlie at 9:04 AM