Thanks to rod-the-farmer for the link. 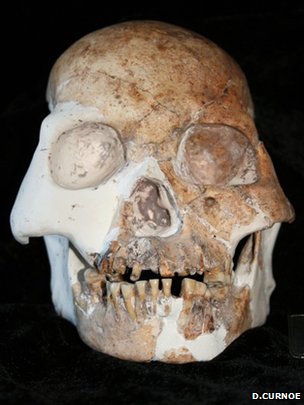 The remains of what may be a previously unknown human species have been identified in southern China.

The bones, which represent at least five individuals, have been dated to between 11,500 and 14,500 years ago.

But scientists are calling them simply the Red Deer Cave people, after one of the sites where they were unearthed.

The team has told the PLoS One journal that far more detailed analysis of the fossils is required before they can be ascribed to a new human lineage.

"We're trying to be very careful at this stage about definitely classifying them," said study co-leader Darren Curnoe from the University of New South Wales, Australia.

"One of the reasons for that is that in the science of human evolution or palaeoanthropology, we presently don't have a generally agreed, biological definition for our own species (Homo sapiens), believe it or not. And so this is a highly contentious area," he told BBC News.

Much of the material has been in Chinese collections for some time but has only recently been subjected to intense investigation.

This post was made using the Auto Blogging Software from WebMagnates.org This line will not appear when posts are made after activating the software to full version.
Posted by Garrett Fogerlie at 11:47 AM