Yes, life without God can be bleak. Atheism is about facing up to that - Julian Baggini - The Guardian

Attempts to brighten up atheism's image miss its unique selling point – life can be brutal, yet we live in recognition of that 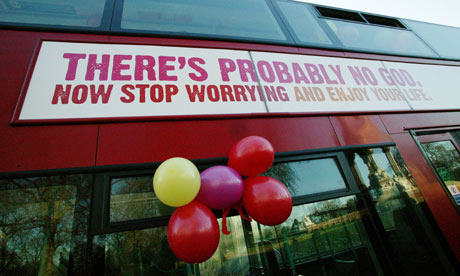 Atheists have to live with the knowledge that there is no salvation, no redemption, no second chances.' Photograph: Frank Baron for the Guardian

The problem with the "atheist" moniker has been recognised for decades. It's too negative, too associated with amoral nihilism. It's understandable then that many would agree with Richard Dawkins that we need a word like "gay" which "should be positive, warm, cheerful, bright". So why not "bright"?

One reason, which I mentioned right at the start of this series, is that it sounds too smug. But there's an even more important reason why we should not choose a word that is "positive, warm, cheerful": although many atheists are all those things, atheism itself is none of them.

Atheists have seemed rather keen in recent years to stress their jolly side. As well as the whole "brights" movement, there's the "happy human" logo used by the International Humanist and Ethical Union, the British Humanist Association and several other humanist groups. Then there were the atheist bus posters telling us that we should stop worrying and enjoy life.

This post was made using the Auto Blogging Software from WebMagnates.org This line will not appear when posts are made after activating the software to full version.
Posted by Garrett Fogerlie at 10:29 AM