Their husbands have run some of the most brutal regimes of the Arab world. But who are the women who stand by the dictators? 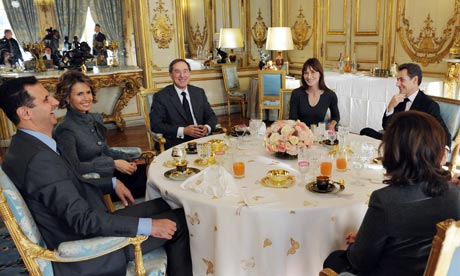 Bashar al-Assad and his wife Asma posing for the cameras at the Elysée palace with Nicolas and Carla Sarkozy, 9 December 2010. Photograph: Franck Fife/AFP/Getty Images

In December 2010, the French first lady Carla Bruni sat down to lunch under the gold chandeliers of the Elysée palace with Asma al-Assad, wife of the Syrian leader Bashar. As they sat demurely with their husbands around a butterfly-print tablecloth dominated by a pastel flower-arrangement, a photographer was ushered in to grab a picture for French celebrity magazines. After all, this was a communion of fashion's high priestesses: a former Italian supermodel turned folk-singer entertaining a Chanel-loving, London-raised, former banker and conveniently westernised Middle Eastern first lady. French Elle had recently voted Asma "the most stylish woman in world politics", Paris Match called her "an eastern Diana", a "ray of light in a country full of shadow zones".

Only days after the lunch, a desperate Tunisian vegetable seller would set himself alight, sparking the first revolution of the Arab spring. Already, as the Sarkozys' butlers served the Assads crystal glasses of freshly squeezed juice from silver platters, there was unease among certain diplomats about the French president schmoozing the ruler of an oppressive dictatorship known for torture, brutality and political prisoners. But Nicolas Sarkozy, an expert on the importance of photogenic wives in politics, saw Asma as his insurance policy. "When we explained that this was the worst kind of tyrant, Sarkozy would say: 'Bashar protects Christians, and with a wife as modern as his, he can't be completely bad,'" the former French foreign minister Bernard Kouchner later confided to journalists.

This post was made using the Auto Blogging Software from WebMagnates.org This line will not appear when posts are made after activating the software to full version.
Posted by Garrett Fogerlie at 8:48 AM