Why do the religious insist on presenting a united front? - Julian Baggini - Guardian Comment Is Free 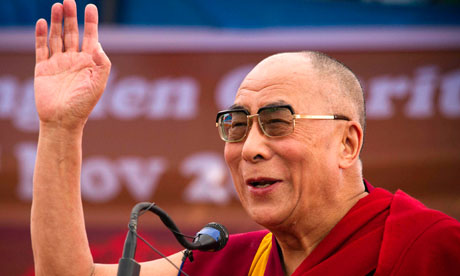 The Dalai Lama: happy to speak out against capitalism. Photograph: Ashwini Bhatia/AP

The humanist philosopher Simon Blackburn recounts a wonderful anecdote told to him by a colleague about a high-powered interfaith panel discussion. Each speaker took turns to explain some key ideas of their faith – Buddhist, Hindu and so on – and the response from other panel members was always along the lines of: "Wow, terrific, if that works for you that's great." The same response greeted the Catholic priest who talked of Christ and salvation, but instead of being pleased with their enthusiasm "he thumped the table and shouted: 'No! It's not a question of if it works for me! It's the true word of the living God, and if you don't believe it you're all damned to hell!'"

"And they all said, 'Wow, terrific, if that works for you that's great.'"

The puzzle for many of us is why this kind of thing doesn't happen more often. The simple fact is that almost everyone who is serious about their religion believes that others have got it badly wrong. If they're not going to hell, then they are at least missing out on life's most important truths. So why the silence about the errors of other faiths?

The most obvious explanation is simple civility and a respect for different opinions. It would be rude and arrogant for a member of one religion to criticise another, so if they can't say anything nice, they don't say anything at all. But this doesn't add up. Rowan Williams, for example, does not seem to think he's being rude or arrogant when he criticises the government (especially since he frames it as "encouraging the present government to clarify what it is aiming for"). The Dalai Lama is not considered rude or arrogant for criticising capitalism for being "concerned only with gain and profitability".

The Association of British Muslims was not rude or arrogant when it quite rightly criticised the UN general assembly for removing a clause abut the sexual orientation of the victims from its resolution on extrajudicial, summary or arbitrary executions. It seems religious leaders have no problem finding civil ways of being critical of everyone apart from each other.

So there's got to be something else going on here and it doesn't seem uncharitable to suggest that it's a kind of sticking together for self-interest, a version of "the enemy of my enemy is my friend". A religion's direct competitors are not the biggest threat. People rarely switch between them and because the traffic tends to be two-way, the net affect is usually negligible anyway. The real danger comes from people giving up on religion altogether. So religions have an interest in "sector building", seeing promotion of the profile of their kind existential product as being more important than their particular brand.

This post was made using the Auto Blogging Software from WebMagnates.org This line will not appear when posts are made after activating the software to full version.
Posted by Garrett Fogerlie at 1:06 PM