What does Professor Stephen Hawking believe in?
Some quotes on God and Religion / Religious beliefs 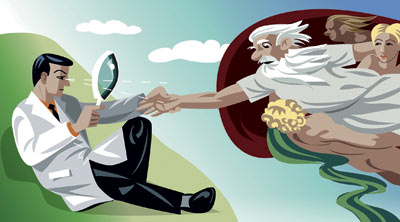 "One can imagine that God created the universe at literally any time in the past. On the other hand, if the universe is expanding, there may be physical reasons why there had to be a beginning. One could imagine that God created the universe at the instant of the big bang, or even afterwards in just such a way as to make it look as though there had been a big bang, but it would be meaningless to suppose that it was created before the big bang. An expanding universe does not preclude a creator, but it does place limits on when he might have carried out his job!"

"With the success of scientific theories in describing events, most people have come to believe that God allows the universe to evolve according to a set of laws and does not intervene in the universe to break these laws. However, the laws do not tell us what the universe should have looked like when it started -- it would still be up to God to wind up the clockwork and choose how to start it off. So long as the universe had a beginning, we could suppose it had a creator. But if the universe is really completely self-contained, having no boundary or edge, it would have neither beginning nor end: it would simply be. What place, then, for a creator?"

This post was made using the Auto Blogging Software from WebMagnates.org This line will not appear when posts are made after activating the software to full version.
Posted by Garrett Fogerlie at 11:55 AM