The Church does not "own" marriage nor have the exclusive right to say who can marry, a government minister has said. 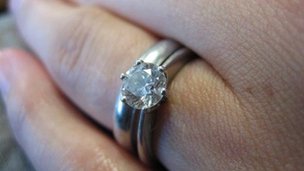 Equalities minister Lynne Featherstone said the government was entitled to introduce same-sex marriages, which she says would be a "change for the better".

Her comments come as ministers prepare to launch a public consultation on legalising gay marriage next month.

Traditionalists want the law on marriage to remain unchanged.

Writing in the Daily Telegraph, Ms Featherstone said: "Some believe the government has no right to change it (marriage) at all; they want to leave tradition alone.

'Reflect society'
"I want to challenge that view - it is the government's fundamental job to reflect society and to shape the future, not stay silent where it has the power to act and change things for the better."

Ms Featherstone, a Liberal Democrat minister, responded to comments made by Lord Carey, a former Archbishop of Canterbury, who said that "not even the Church" owns marriage.

She said: "(Marriage) is owned by neither the state nor the Church, as the former Archbishop Lord Carey rightly said.

"It is owned by the people."

Ms Featherstone also appealed to people not to "polarise" the debate about same-sex marriages.

"This is not a battle between gay rights and religious beliefs," she said.

"This is about the underlying principles of family, society and personal freedoms."

This post was made using the Auto Blogging Software from WebMagnates.org This line will not appear when posts are made after activating the software to full version.
Posted by Garrett Fogerlie at 4:24 AM