What is the proper place for religion in Britain's public life? - Will Hutton and Richard Dawkins - The Observer

Britain became engulfed in a culture war last week as secularists and believers clashed over the role of religion in public life. Even the Queen intervened to defend the Church of England's role. Richard Dawkins, whose survey about Christianity in the UK ignited the row, defends his position on secularism, faith and tolerance in conversation with Will Hutton of the Observer 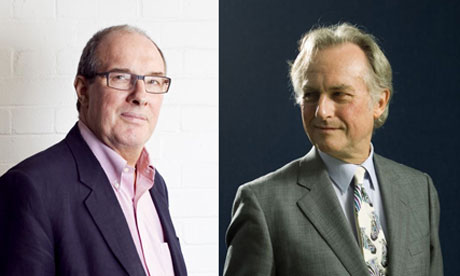 I write in defence of liberalism – a tradition as traduced by Baroness Warsi sounding off in the Vatican about a liberal elite undermining religion's necessary and important centrality in national life as it is by your high profile campaign to convert us all to atheism. There are many dimensions to liberalism – proportionality, due desert, mutual respect, belief in pluralism and tolerance of dissent – but we liberals would no more want to pillory those who have faith than we would want to endorse a philosophy that for all its appeal to rationality does not respect difference.

Thus we are neither the virus of which Warsi complains nor your foot soldiers, even while as a liberal I would defend to the last your expression of your atheist views. You play an important role in our national life in provoking a high octane debate. But I can't join your campaign. Liberalism is a doctrine of live and let live, and there has to be a very high threshold of harm before that liberal principle can be qualified.

Of course when religion is carried to absurd and dangerous degrees – the Tea Party movement in the US or Islamic fundamentalism – I am opposed, but for the same reasons I recoil from any zealot. George Osborne's irrational zealotry on debt and deficit reduction is a much more serious threat to our wellbeing than Archbishop Rowan Williams's Anglicanism. Indeed paradoxically the Church of England he leads is a great liberal redoubt – an institution that embodies proportionality, tolerance of dissent and respect for others along with considerable moral authority.

It is our ally, not our enemy, as we are discovering again in its battle against the devastating and thoughtless welfare cuts and the argument for a responsible capitalism. It is why so many English people support it even while their practice and understanding of Christianity is uncertain. Please don't confuse that hesitancy with their quiet respect – even love – of an institution they understand and feel they need.

Tolerate it and them.
Best, Will

We really agree. I am as committed to liberalism as you. That's why my foundation is campaigning for secularism, not atheism. There are many religious secularists, including Gandhi, Martin Luther King, plenty of clergy, JF Kennedy and indeed every religious American who upholds the constitution.

I personally – as opposed to my foundation – would be happy to persuade people towards atheism, but there is nothing illiberal about persuasion. What is illiberal is not persuasion but imposition of one's views. And the government, in its determination to "do God", imposes religion on us. Bishops in the House of Lords is just one of many examples.

Ministers justify such impositions by appeals to the 72% of the population who, according to the 2001 census, are Christian. But was this impressive figure inflated by people who, though they self-identify as Christian in the census, aren't really religious at all? No decent liberal could object to non-religious people choosing to call themselves Christian on the census form. It's their choice and, as a cultural Anglican, I can even sympathise. But we can object if the consequently inflated number of "Christians" is used to justify illiberal imposition of religiously inspired policies.

How could we discover whether the Christian tally is inflated? The 2011 census can't help because it baldly asked for religious affiliation, no supplementary questions. The UK branch of the Richard Dawkins Foundation for Reason and Science (not atheism, please note) commissioned Ipsos MORI to poll, in the week immediately after the census, those people who ticked the Christian box: the "Census Christians".

And what Ipsos MORI found was devastating. First, the number of Census Christians has dropped from 72% to about 54%. And a high proportion of the 54% are not religious in any sense that could legitimately be used to justify a government policy of "doing God". The survey is large, thorough and terminally damaging to a "do God" policy. Please read it on the web (tinyurl.com/6rrso48). You'll be astonished at the low levels of religious knowledge, belief and practice among UK Christians, and at their very clear opposition to religion having special influence on public policy.
All good wishes, Richard

Posted by Garrett Fogerlie at 1:47 AM