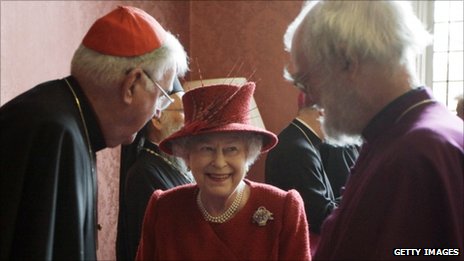 The Queen spoke to the Archbishop of Canterbury, right, and the Catholic Church's Cardinal Cormac Murphy-O'Connor

The Queen has spoken of her belief that the Church of England has "a duty to protect the free practice of all faiths" in the UK.

In a speech at London's Lambeth Palace, she argued the Church's role was not to "defend Anglicanism to the exclusion of other religions".

She added the concept of an established Church was "occasionally misunderstood" and "commonly under-appreciated".

The Queen was accompanied by Prince Philip at the multi-faith reception.

The royal couple were greeted by the Archbishop of Canterbury, Dr Rowan Williams, before meeting representatives of the Baha'i, Buddhist, Hindu, Jain, Jewish, Muslim, Sikh, and Zoroastrian communities, as well as Christian representatives.

They each presented a treasured object or text of importance to their faith.

The reception was one of the Queen's first public engagements to celebrate her Diamond Jubilee year.

Addressing the gathering, the Queen said the Church of England had "gently and assuredly" created an environment for other faith communities and people of no faith to live freely.

"Woven into the fabric of this country, the Church has helped to build a better society - more and more in active co-operation for the common good with those of other faiths."

Read on and view video

Posted by Garrett Fogerlie at 9:52 PM