"Some religions insist on the sexual abstinence before marriage. Isn’t it ironic that the journal Reproductive Health reports a correlation showing that the more religious the state, the higher the rates of teenage pregnancy?

Here's from the report by Reproductive Health:

"Conclusions
With data aggregated at the state level, conservative religious beliefs strongly predict  U.S. teen birth rates, in a relationship that does not appear to be the result of  confounding by income or abortion rates. One possible explanation for this  relationship is that teens in more religious communities may be less likely to use  contraception. " 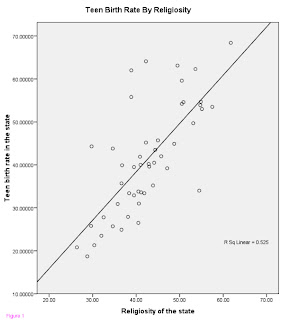 Teen birth rate by religiosity
Posted by Garrett Fogerlie at 11:09 AM