Simply being near a church makes people more hostile to outsiders

"In a recent study, Jordan LaBouff (University of Maine) worked with colleagues at Baylor College to discover whether attitudes to different groups are affected by subliminal Christian priming.

So what effect does religious priming have on ordinary people? To test this, LaBouff stopped people at random outside a church in the Netherlands (and, to check if the effect was culturally specific, a few people outside Westminster Abbey in London). He asked them a series of questions, including asking them to rate their attitudes to different groups on a 1-10 scale.

He also stopped some other people in a location that contained only civic buildings (in England, the location chosen was the Houses of Parliament). 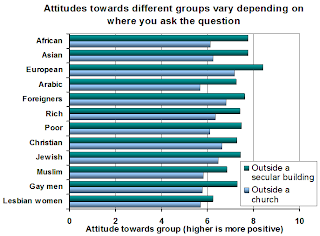 Attitudes towards different groups vary depending on where you ask the question.
Posted by Garrett Fogerlie at 10:09 AM