Kids are less likely to come with supernatural explanations than adults

"It's pretty much taken as an assumption these days that human beings are 'natural-born believers'. Ask a cognitive scientist who specializes in religion, and they will tell you that our brains are predisposed to all sorts of supernatural concepts.

And when independent researchers outside the core groups test the hypothesis, they often get results that don't fit the story. That's the case with a new study by Jacqui Woolley, a psychologist at the University of Texas.

She and her colleagues read some short tales to a bunch of kids (67 in total) aged 8, 10 or 12, and also 22 adults. All the stories illustrated a 'difficult to explain' event.

So they read these stories and then asked the listener how the event could be explained. The surprising thing was that the kids hardly ever offered up supernatural explanations.

Adults, on the other hand, readily offered up supernatural explanations. There was a clear trend, too, as you can see in the graph - the older the child, the more likely they were to explain these strange happenings by recourse to the supernatural 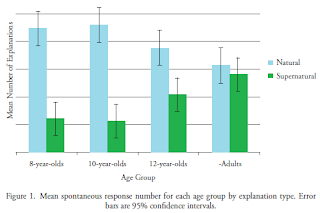 Kids are less likely to come with supernatural explanations than adults
Posted by Garrett Fogerlie at 9:09 AM